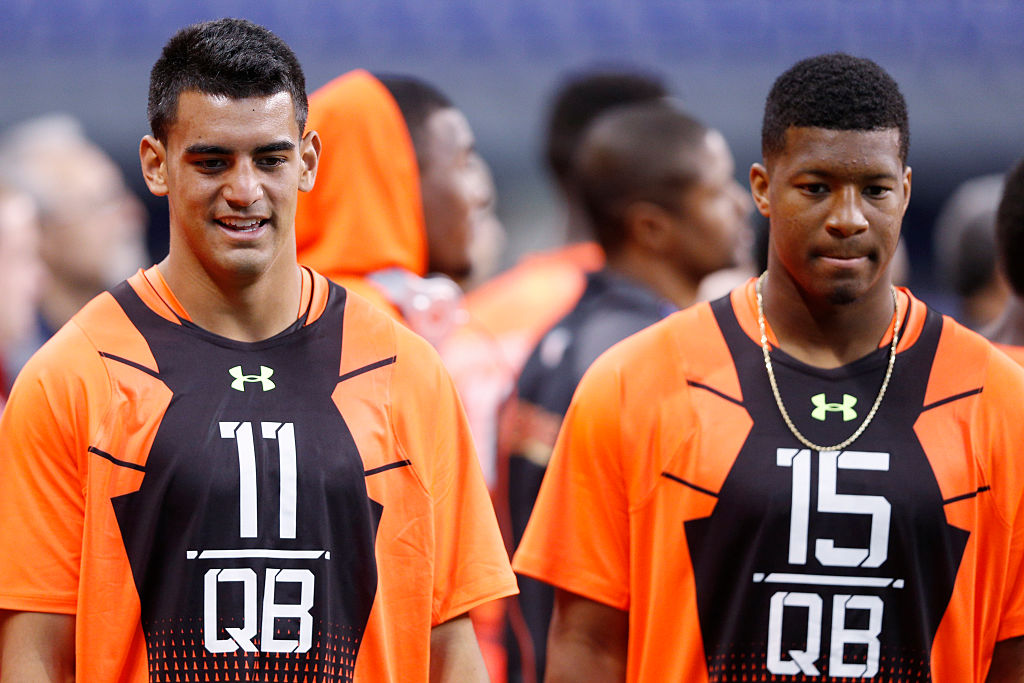 Because every major American sport that’s typically played at this time of year is now in absentia thanks to the Covid-19 outbreak, we’re shifting our attention to the most important signings, trades, rumors and trends around the NFL via a dedicated daily column. This is Free Agency Watch.

In 2015, Florida State quarterback Jameis Winston and Oregon signal-caller Marcus Mariota were drafted back-to-back by the Tampa Bay Buccaneers and Tennessee Titans with the first two picks in the NFL Draft. Now, five NFL seasons later, neither Winston (the 2013 Heisman Trophy winner) nor Mariota (the 2014 Heisman Trophy winner) is still with the franchise that drafted him.

Mariota, who was benched last season in favor of former JAG (just a guy) Ryan Tannehill, is now with the Las Vegas Raiders and should have the chance to compete with David Carr for the starting job. As of now, Winston — who became the first NFL quarterback in history to throw for at least 30 touchdowns and 30 interceptions last season — is unemployed after Tampa Bay let him walk in free agency in favor of Tom Brady.

Once viewed as the potential saviors for the Bucs and Titans, Winston and Mariota have proven to be, for the lack of a better term, busts. Though their interception (Mariota has 44; Winston has 88) and touchdown (Mariota has 76; Winston has 21) totals are vastly different, the pair have eerily similar numbers when it comes to winning percentage and quarterback rating.

And, sad as it may be, Winston and Mariota were definitely the best quarterbacks drafted in 2015.

Of the other quarterbacks drafted with Winston and Mariota — Garrett Grayson (No. 75 overall out of Colorado State), Sean Mannion (No. 89 overall out of Oregon State), Bryce Petty (No. 103 overall out of Baylor) and Trevor Siemian (No. 250 overall out of Northwestern) and Brett Hundley (No. 147 overall out of UCLA), only one is even still in the NFL: Hundley, who backs up Kyler Murray for the Cardinals. The rest of those picks? Wasted.

And the tale of the 2015 class is not just a cautionary one for the quarterback position.

Former Pro Bowl running backs Todd Gurley (No. 10 overall out of Georgia), Melvin Gordon (No. 15 overall out of Wisconsin), David Johnson (No. 86 overall out of Northern Iowa) and Jay Ajayi (No. 149 overall out Boise State) were all taken in the same draft as Winston and Mariota. Like those two quarterbacks, none are still with the teams that drafted them (the Rams, Chargers, Cardinals and Dolphins) and Ajayi is no longer even in the NFL, having taken up professional gaming. (It’s apparently not going well.)

Though it’s hardly a secret that success in the NFL is fleeting and longevity is virtually non-existent, the current state of the 2015 draft class is a sobering reminder of just how true that non-secret is. The NFL really is the Not Forever League.

Looking toward next season instead of back to 2015, the Packers are expected to sign 26-year-old wide receiver Devin Funchess, the Bengals have signed 25-year-old safety Vonn Bell, formerly of the Saints, and the Chargers inked 22-year-old tight end Donald Parham, formerly of the XFL’s Dallas Renegades.

Elsewhere, the Bucs re-signed defensive Ndamukong Suh to a one-year deal that will pay him $8 million and give Tampa a nice complement to edge rushers Shaq Barrett and Jason Pierre-Paul. And in another defensive move, the Cowboys agreed to terms with defensive tackle Dontari Poe, formerly of the Panthers and Chiefs. Poe will now pair with fellow former Panther Gerald McCoy on what should be an improved Dallas defensive line.

In Philadelphia, the Eagles bolstered their already improved secondary by signing cornerback Nickell Robey-Coleman, formerly of the Rams. A borderline top corner, Robey-Coleman will be the clear No. 2 in Philly behind new addition Darius Slay.